Posted at 10:13h in All Club News, Cruiser Racing by PRO 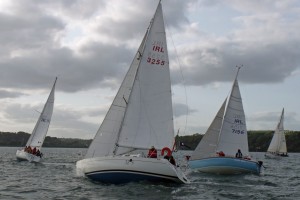 Race Officer, Kevin O’Connor chose to start the eight spinnaker class boats and four whitesail boats at EF1, before sending them “on a great beat to the weather mark at no 11”, out the harbour to number 5, and back home via no.s 14 and 11.

There was incident a-plenty on what Re Eile, described as a “manic” start line. Huntress was severely compromised by her need to recover a crew member from the water in the period immediately before the five minute gun, but all other boats got cleanly away. An under-crewed Kodachi started particularly well – albeit courtesy of Bedlam, “who were quite gentlemanly” in not pressing for rights at the pin end. Most skippers choose to beat to no. 11 with a reduced sail plan. The prudence of this strategy was particularly evident on the trip from 11 to 5. Re Eile shook out her reefs early on this leg but soon felt over-powered in the gusts. Bedlam, on the other hand, avoided the temptation to increase their sail area and remained well in control.

The fleet continued to sail conservatively on the reach back in from no 5, delaying their spinnaker hosts until after they turned for home at the no. 11 gybe mark. Jay, for one, paid the price of ambition, broaching spectacularly during an early spinnaker hoist. With the breeze abating slightly, the fleet had, what one skipper called “a lovely run to the finish” at EF1. As Damian Aherne of Re Eile, states “its a great way to finish the week – Blows the cobwebs out”. Kodachi placed first in IRC with Bedlam second and Jay third. Bombora placed first in ECHO with Bedlam second and Kodachi in third. Wader placed first in the white sail division. After five races, Re Eile retains top spot in IRC.