Posted at 14:17h in All Club News, Cruiser Racing by PRO

Day 2 yesterday in the Quarter Ton Cup and Illes Pitiuses scored consistently well with a 6, 6, & 4. With the discards applied they now stand in 4th place overall and are top of the Corinthian (All Amateur) Division. 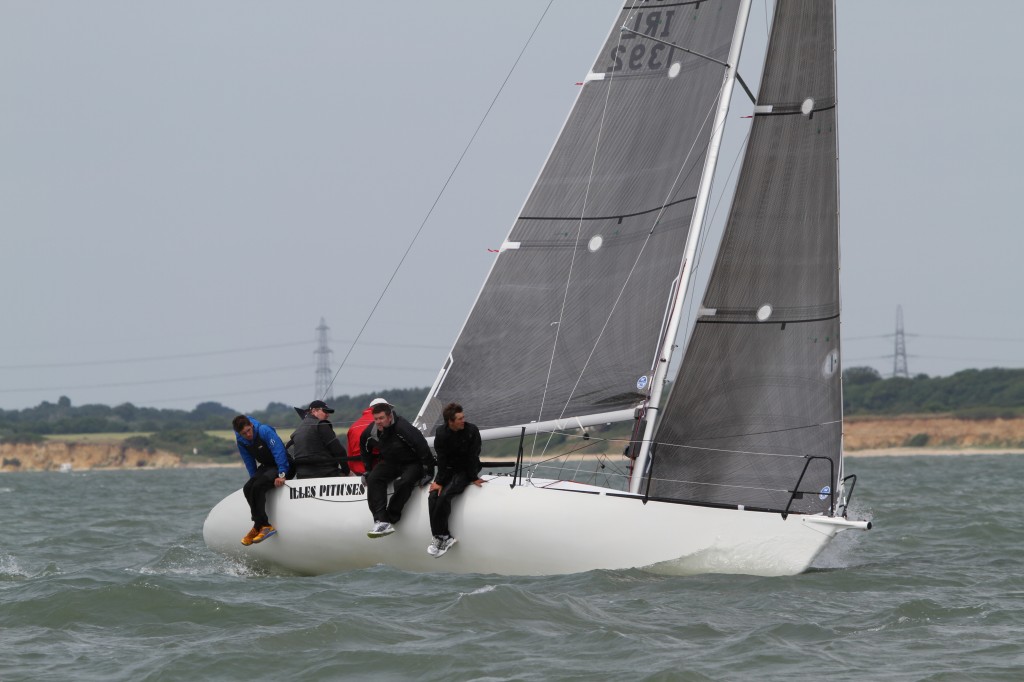 Day two of the Coutts Quarter Ton Cup 2014 brought stronger winds and some thrilling racing for the 31 competing teams. Quarter Ton racing is always close but today’s three races were particularly tight with fast and furious action at every mark and a few classic IOR broaches to keep the spectators entertained.

With the wind in the mid teens from the southeast, Race Officer Rob Lamb took his charges up onto the Solent’s Hill Head plateau and was able to confidently complete races four to six of the planned nine race series. The increase in wind strength was an advantage for some and a disadvantage for others.

Overnight leader Rickard Melander and his team of Fredrik Brotell, James Hynes, David Lenz and Tom Wilson aboard Alice II got off to a great start by winning race four but then struggled to gain traction in race five finishing seventh, their worst result of the regatta so far. They came back strongly in race six with a second but it wasn’t enough to hang onto the lead which has been snatched from them by Peter Morton’s Bullit. Bullit was able to discard a seventh now six races have been completed and added 2, 1, 1 to their card. Crewed by Kelvin Rawlings, Jules Salter, Anthony Haines and Jason Carrington they now lead the overall standings by 1.5 points with Alice II second. Willie McNeill and the Illegal Immigrant crew retain third place overall, nine points behind Alice II and three points ahead of Jason and Dominic Losty’s Illes Pitiuses in fourth.

It wasn’t such a good day for Sam Laidlaw’s Aquila. Having gone into the day in fourth they put in a good showing in the first two races with a fourth and a third, but a thirteenth in race six was their worst result of the regatta and they have dropped down into fifth, three points behind Illes Pitiuses and five ahead of Ian Southworth’s Whiskers. Reigning Coutts Quarter Ton Cup Champion Louise Morton in Espada has been unable to replicate her 2013 form and having gone into the day in fifth overall she has dropped down to eighth, two points behind Whiskers.

In the Corinthian Division Jason and Dominic Losty’s Illes Pitiuses, crewed by Jack Trigger, Adam Munday and Mark Mansfield, continues to lead and has a two point advantage over Pierre Paris’s Pinguin Playboy, crewed by Glen Hiliquin, Basile Geron, Benois Cuchemin and Pascal Rousselin, who in turn has a comfortable eleven point margin on Purple Haze, owned by Phil Cook. Whilst the leading pair will be hard to pass, the battle for third Corinthian is going to be close with Geoff Gritton’s Panic, the Brady/McCormack & Lawless syndicate’s Cartoon, the Stewart, Young, Smith partnership’s Engima and Bad Toad, owned by Paul Roberts and Jo and Sarah Assael, all still within striking distance of Purple Haze and that final podium position.

One team for whom the Quarter Ton craic is definitely mighty is Sai Kung Bell. Owner Jamie McWilliam shipped the boat to the UK especially for the event and has taken the opportunity to bring together a team he first raced with 23 years ago in One Tonners. Although Jamie has raced with his brother Tom McWilliam, Jamie Boag, David Hassett and Peter Austin in the intervening years, it’s the first time they have all come together on the same boat since and they are making the most of the opportunity to celebrate their reunion. Afloat they are laughing their way around the course and ashore they are leading the social charge and helping to ensure the bars of Cowes achieve good profits this season!

Today’s stronger winds sadly produced a significant gear failure for Lucy Wood and Tara Stone’s Rum Bleu. During the second race of they day they were lucky to spot a crack appearing in their mast at the gooseneck and were able to rapidly drop sail before the entire rig went over the side. Back ashore inspection of the damage has revealed that repairs will not be possible before the start of tomorrow’s racing. Although very disappointed not to be able to complete the regatta the girls were philosophical and just glad they had avoided a dismasting.

The forecast for tomorrow’s final day is for southwesterlies in the mid to high teens and sunny spells with showers so there is every chance that the final three races of the series will be completed. Tomorrow evening competitors will come together for the Coutts Quarter Ton Cup Tenth Anniversary Gala Dinner and Prize Giving. Joining the sailors will be representatives of event sponsor Coutts and Quarter Ton Class Patron Bob Fisher.